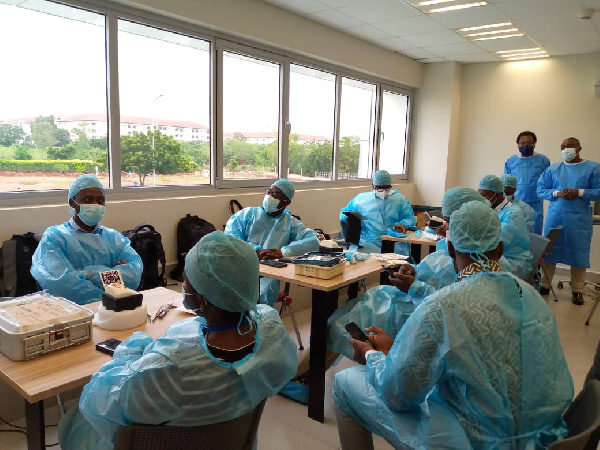 Ghanaian neurosurgeons were introduced to the UpSurgeOn Academy training platform, which aims to enhance the traditional approach to teaching neurosurgery through the use of three-dimensional (3D) technologies applied to surgical simulation .

The latest global training technology breaks down the challenges of surgery into various brain boxes, which were real-time 3D printed images of the brain, showing real-time situations and pathologies in the brain.

It also comes with software downloaded to a mobile phone or tablet to allow the learner to scan any part of the brain, and also freely interact with the models through a combination of virtual reality and these. simulated brain boxes offering surgeons the operating experience.

It is, however, important for people to know that there is a slight difference between a neurosurgeon and a neurologist even though they are both physicians who specialize in treating medical problems affecting the central nervous system, which controls most of the functions of the body. body and mind. composed of the brain and spinal cord.

While neurosurgeons focus on the surgical aspect of treatment and often serve as consultants to other health specialists due to their practical knowledge and high skills with the human nervous system, the neurologist uses alternative forms to treat patients with illnesses and conditions such as headaches, Alzheimer’s disease, sleep disturbances, pain and brain tumors.

It is therefore very important to always know the difference between doctors when trying to diagnose a particular medical condition.

Dr Teddy Totimeh, neurosurgeon at the University of Ghana Medical Center (UGMC), where the training takes place, told the Ghana News Agency (GNA) in Accra that the technology is revolutionary as it will replace the use corpses (dead bodies), which were traditionally used for hands-on learning in medical schools.

He explained that using corpses for hands-on training presented challenges and limitations as there was no possibility to create different scenarios or environments that learners could practice with, meaning it all depended on chance. until the surgeon walks into the theater to carry the knowledge and skills learned about a patient for life, and that’s where confidence slowly built up in dealing with the different types of cases presented.

Dr Totimeh said the benefits of these latest 3D technologies include the fact that through these simulations the learner was able to create several repeated scenarios using the standard operating equipment used in the theater for surgeries for their practice. in order to gain the desired experience and the ability to perform a particular type of surgery.

“The advantage here is that it ensures a risk-free environment as no one’s safety is compromised, and this is done in a relaxed situation, where the trainees can gain a lot of experience as they can practice over and over again”, he added.

Dr Totimeh, said the first training in Ghana had five neurosurgery residents as learners, in addition to neurology consultants who will want to deepen their skills and expose themselves to all kinds of surgeries that were not traditionally performed. in the country, and the processes will also be streamed live on the UGMC’s Facebook page for the benefit of others, including the West African Neurosurgeon Community, to watch as well.

Dr Abass Adam, President of the Ghana Academy of Neurosurgeons (GNAS), said Ghana is very fortunate to have been selected by the UpSurgeOn Academy as part of its location to showcase this technology, as well as for the global training program to stimulate learning.

He said this technology allowed surgeons to acquire a lot of skills in a very short time that they would not otherwise have taken many years to acquire, and suggested that this was a good opportunity for Ghana to acquire new skills. urgently these brain boxes rather than returning them after training. .

“For two weeks that we’ve been working on these brain boxes together, I don’t think we’ve had to turn the boxes around. It is something revolutionary for participation in the training of neurosurgeons in Ghana if we are able to acquire this facility, ”he said.

Dr Adam said the training has three stages consisting of the knowledge and skills of using the software and brain boxes and then the hybrid stage where the two had to be mixed to perform surgery by addressing the pathology or the disease. cause and effect of the disease in any part of the brain as in real time situations.

He said that neurosurgeons young and old can learn many skills and apply them to various pathological situations such as an aneurysm.

An aneurysm is a medical condition that causes areas of an artery in the brain, the back of the knee, or the intestine to swell and weaken, among others, and studies show their treatment ranges from watchful waiting. to emergency surgery.

He said the aneurysm could cause the brain to rupture leading to stroke or intestinal hemorrhage, and both could be fatal with the current lack of knowledge and care, noting that large numbers of patients in Ghana are died almost immediately after complaining of the severe head attack. or upset stomach.

“We have started to set up surveys and have noticed that on average nationwide no less than 20 cases of aneurysm are recorded in a month”, and that could be catastrophic because many people can suffer from disease but may not have knowledge or research. for medical care, he said.

Dr Mensah warned that the disease could happen to anyone, regardless of their social or economic status, without warning, and it can be a disaster for a country like Ghana which does not have a specific treatment center. for this type of disease, and that is why the GANS considered it crucial for the acquisition of these brain boxes for the improvement of the expertise of neurosurgeons, for a better delivery of health care.

Universal Health Coverage (UHC) 2030, highlights the contributions of all health professionals in the perspective of achieving the Sustainable Development Goals (SDGs), so to accelerate progress there must be an increase in national resources for public financing of health in the most equitable and sustainable way.

In the Abuja Declaration signed by the heads of state of African Union countries in 2001, they pledged to allocate at least 15% of annual budgets to improving the health sector, but the expenditure of the government in the health sector remain a challenge.

Other studies show that weaknesses in health systems manifested themselves with the onset of the COVID-19 pandemic, which has crippled many people and continues to threaten even the seemingly strong systems of worthy nations around the world.

Equity is at the heart of UHC. Therefore, all roadmaps to achieve the 2030 goals must include the most vulnerable people who struggle to access even basic services and who would be pushed further into poverty trying to meet a basic need.